By Henry Samuel, Paris, Rob Crilly in Ajdabiya and Richard Spencer in Tripoli 10:58PM GMT 15 Mar 2011
France and Britain failed to persuade other world powers meeting in Paris to impose a no-fly zone over the country, where pro-Gaddafi forces claimed to have taken the last major town before the rebel capital, Benghazi. 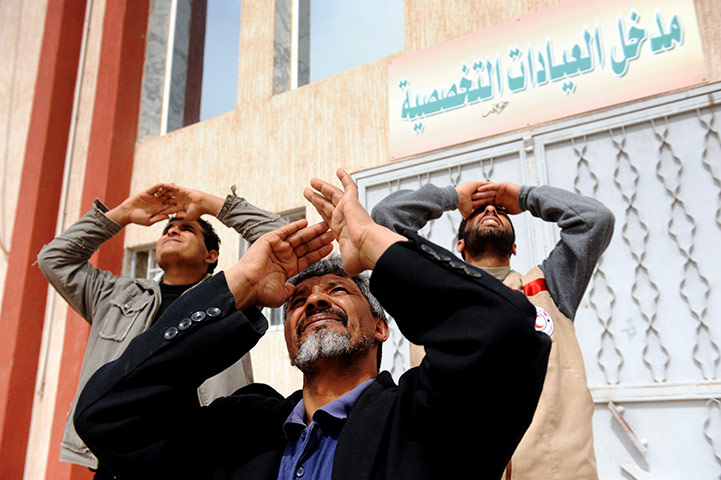 The no-fly proposal was absent from the G8 foreign ministers’ closing statement in Paris, following resistance from Russia, Germany and the US. China, a United Nations security council veto-holder, is also opposed.
Alain Juppé, the French foreign minister said: “If we had used military force last week to neutralise some airstrips and the several dozen planes that they have, perhaps the reversal taking place to the detriment of the opposition wouldn’t have happened. But that’s the past. Gaddafi is scoring points. We have perhaps missed a chance to restore the balance.”
Col Gaddafi, in an interview, said Germany, Russia and China would now be rewarded with business deals and oil contracts.
Residents of the town of Ajdabiya in eastern Libya said government soldiers entered its streets before nightfall and quickly encircled the town.

_________________________
Rebels who had lost a string of oil towns to Col Gaddafi’s forces in the past week had planned to dig in to defend the town, which controls the coast road to Benghazi and the desert road to Tobruk and the Egyptian border.

Without it, they must face the possibility of an overwhelming assault on Benghazi’s million-strong population from the government’s superior firepower. But by early afternoon fighters were retreating from Ajdabiya amid scenes of panic.
“Gaddafi is coming,” screamed one revolutionary volunteer as he sprinted from a checkpoint on the far west of the town that had been picked out by incoming Katyusha rockets.

Cars crammed with children filled the road to Benghazi as families joined the rout. They raced alongside pickups packed with soldiers and trucks fitted with anti-aircraft guns.
All the while the crump of exploding rockets echoed through the streets, under the watchful eye of a spotter plane high above.

“They are bombing everywhere. They are killing people, civilians, whatever,” said Sherif Layas, 34, who was a marketing manager before he took up arms and joined Libya’s revolution.
He added that Gaddafi’s forces were about to reach the point where the rebels would be unable to resist without outside help. “This is the death line, right here,” he said.
Mr Juppé said there was now nothing to stop Mr Gaddafi overrunning the eastern rebel stronghold of Benghazi.

G8 members did agree that the United Nations Security Council should “increase the pressure, including through economic measures, for Muammar Gaddafi to leave,” Mr Juppé said. Diplomats are now drafting a UN resolution.
“There is a common appetite to increase the pressure on the Gaddafi regime,” said William Hague, the foreign secretary.
Insurgents have been desperately calling for a no-fly zone, and the Arab League came out in support over the weekend. But Russia said it wanted more details on how it would work, while Germany said it was “very sceptical”.
“We do not want to get sucked into a war in North Africa,” said Guido Westerwelle, Germany’s foreign minister.

David Cameron said the Gaddafi regime had already committed “multiple breaches” of an existing UN resolution.
The Prime Minister told the Cabinet that the Libyan leader must be made to comply with orders not to attack civilians, as set out in UN resolution 1970.

President Nicolas Sarkozy of France has called for the toughest action against the Gaddafi regime. Col Gaddafi said the French president was suffering from a “psychological illness”. “He is my friend but I think he has gone mad,” he said.
He warned that the West would pay for its hostility to him in business deals in the future – except for Germany.
“We don’t trust their ambassadors any more, they have conspired against us,” he said. “We don’t trust their firms. “We are going to invest in Russia, India and China now. That’s where our money is going to be invested. Oil contracts will now go to Russian, Chinese and Indian firms.
“You can forget about the West!”

Permanent link to this article: http://cameronduodu.com/uncategorized/world-leaders-leave-libyan-freed0om-fighters-in-the-lurch