INTERNATIONAL PRESSURE IS RATCHETED ON GADDAFI

GADDAFI — WHEN HE ‘TOOK OVER’ GHANA — by CAMERON DUODU

TRIPOLI UNDER THE SHADOW OF DEATH — BY ROBERT FISK

Robert Fisk: The destiny of this pageant lies in the Kingdom of Oil The London Independent Saturday, 26 February 2011 AFP King Abdullah of Saudi Arabia offered his citizens $36bn to keep their mouths shut

THE Middle East earthquake of the past five weeks has been the most tumultuous, shattering, mind-numbing experience in the history of the region since the fall of the Ottoman empire. For once, “shock and awe” was the right description. The docile, supine, unregenerative, cringing Arabs of Orientalism have transformed themselves into fighters for the freedom, liberty and dignity which we Westerners have always assumed it was our unique role to play in the world. One after another, our satraps are falling, and the people we paid them to control are making their own history – our right to meddle in their affairs (which we will, of course, continue to exercise) has been diminished for ever. The tectonic plates continue to shift, with tragic, brave – even blackly humorous – results. Countless are the Arab potentates who always claimed they wanted democracy in the Middle East. King Bashar of Syria is to improve public servants’ pay. King Bouteflika of Algeria has suddenly abandoned the country’s state of emergency. King Hamad of Bahrain has opened the doors of his prisons. King Bashir of Sudan will not stand for president again. King Abdullah of Jordan is studying the idea of a constitutional monarchy. And al-Qa’ida are, well, rather silent.

Related articles Rebels lay siege to Gaddafi stronghold Barack Obama announces Libya sanctions on Gaddafi regime Christina Patterson: Lessons in life, and love, and fear, from a revolution Britons return from Libya’s ‘living hell’ Rupert Cornwell: Don’t expect the UN to hurry its response Leading article: The West must act quickly to save Libya from Gaddafi Evacuation plan stepped up as threat of further violence grows Home after a life in exile, the pilot tortured by Gaddafi Peter Popham: Tribalism is key to the country’s future Steve Richards: Cameron has his worst week – and more are to come Howard Jacobson: Save us from the opinions of the young Search the news archive for more stories Who would have believed that the old man in the cave would suddenly have to step outside, dazzled, blinded by the sunlight of freedom rather than the Manichean darkness to which his eyes had become accustomed. Martyrs there were aplenty across the Muslim world – but not an Islamist banner to be seen. The young men and women bringing an end to their torment of dictators were mostly Muslims, but the human spirit was greater than the desire for death. They are Believers, yes – but they got there first, toppling Mubarak while Bin Laden’s henchmen still called for his overthrow on outdated videotapes.

But now a warning. It’s not over. We are experiencing today that warm, slightly clammy feeling before the thunder and lightning break out. Gaddafi’s final horror movie has yet to end, albeit with that terrible mix of farce and blood to which we are accustomed in the Middle East. And his impending doom is, needless to say, throwing into ever-sharper perspective the vile fawning of our own potentates. Berlusconi – who in many respects is already a ghastly mockery of Gaddafi himself – and Sarkozy, and Lord Blair of Isfahan are turning out to look even shabbier than we believed. Those faith-based eyes blessed Gaddafi the murderer. I did write at the time that Blair and Straw had forgotten the “whoops” factor, the reality that this weird light bulb was absolutely bonkers and would undoubtedly perform some other terrible act to shame our masters. And sure enough, every journalist is now going to have to add “Mr Blair’s office did not return our call” to his laptop keyboard. Everyone is now telling Egypt to follow the “Turkish model” – this seems to involve a pleasant cocktail of democracy and carefully controlled Islam. But if this is true, Egypt’s army will keep an unwanted, undemocratic eye on its people for decades to come. As lawyer Ali Ezzatyar has pointed out, “Egypt’s military leaders have spoken of threats to the “Egyptian way of life”… in a not so subtle reference to threats from the Muslim Brotherhood. This can be seen as a page taken from the Turkish playbook.” The Turkish army turned up as kingmakers four times in modern Turkish history. And who but the Egyptian army, makers of Nasser, constructors of Sadat, got rid of the ex-army general Mubarak when the game was up?

And democracy – the real, unfettered, flawed but brilliant version which we in the West have so far lovingly (and rightly) cultivated for ourselves – is not going, in the Arab world, to rest happy with Israel’s pernicious treatment of Palestinians and its land theft in the West Bank. Now no longer the “only democracy in the Middle East”, Israel argued desperately – in company with Saudi Arabia, for heaven’s sake – that it was necessary to maintain Mubarak’s tyranny. It pressed the Muslim Brotherhood button in Washington and built up the usual Israeli lobby fear quotient to push Obama and La Clinton off the rails yet again. Faced with pro-democracy protesters in the lands of oppression, they duly went on backing the oppressors until it was too late. I love “orderly transition”. The “order” bit says it all. Only Israeli journalist Gideon Levy got it right. “We should be saying ‘Mabrouk Misr!’,” he said. Congratulations, Egypt! 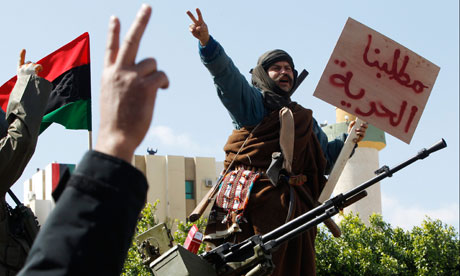 Yet in Bahrain, I had a depressing experience. King Hamad and Crown Prince Salman have been bowing to their 70 per cent (80 per cent?) Shia population, opening prison doors, promising constitutional reforms. So I asked a government official in Manama if this was really possible. Why not have an elected prime minister instead of a member of the Khalifa royal family? He clucked his tongue. “Impossible,” he said. “The GCC would never permit this.” For GCC – the Gulf Co-operation Council – read Saudi Arabia. And here, I am afraid, our tale grows darker. We pay too little attention to this autocratic band of robber princes; we think they are archaic, illiterate in modern politics, wealthy (yes, “beyond the dreams of Croesus”, etc), and we laughed when King Abdullah offered to make up any fall in bailouts from Washington to the Mubarak regime, and we laugh now when the old king promises $36bn to his citizens to keep their mouths shut. But this is no laughing matter. The Arab revolt which finally threw the Ottomans out of the Arab world started in the deserts of Arabia, its tribesmen trusting Lawrence and McMahon and the rest of our gang. And from Arabia came Wahabism, the deep and inebriating potion – white foam on the top of the black stuff – whose ghastly simplicity appealed to every would-be Islamist and suicide bomber in the Sunni Muslim world. The Saudis fostered Osama bin Laden and al-Qa’ida and the Taliban. Let us not even mention that they provided most of the 9/11 bombers. And the Saudis will now believe they are the only Muslims still in arms against the brightening world. I have an unhappy suspicion that the destiny of this pageant of Middle East history unfolding before us will be decided in the kingdom of oil, holy places and corruption. Watch out. But a lighter note. I’ve been hunting for the most memorable quotations from the Arab revolution. We’ve had “Come back, Mr President, we were only kidding” from an anti-Mubarak demonstrator. And we’ve had Saif el-Islam el-Gaddafi’s Goebbels-style speech: “Forget oil, forget gas – there will be civil war.” My very own favourite, selfish and personal quotation came when my old friend Tom Friedman of The New York Times joined me for breakfast in Cairo with his usual disarming smile. “Fisky,” he said, “this Egyptian came up to me in Tahrir Square yesterday, and asked me if I was Robert Fisk!” Now that’s what I call a revolution. Like Robert Fisk on The Independent on Facebook for updates

Permanent link to this article: http://cameronduodu.com/uncategorized/tripoli-under-the-shadow-of-death-by-robert-fisk