TRIPOLI UNDER THE SHADOW OF DEATH — BY ROBERT FISK

HOW TO LOSE A COUNTRY GRACEFULLY

GADDAFI — WHEN HE ‘TOOK OVER’ GHANA — by CAMERON DUODU

Gaddafi represents death — freshlu-dug graves in Benghazi, where many lives were lost seizing the city from his regime.

Right now, Gaddafi is a big danger to black  Africa. Any black person found in Libya is likely to be given very short shrift by the white-skinned section of the Arab population, which believes that Gaddafi has imported — or is importing – blacks from Chad, Nigeria, Ghana, Burkina Faso, Liberia and anywhere else that he has followers, to go and fight for him. One Ghanaian who was among the first batch of 150 that safely returned home, told reporters that  some blacks were being caught and “beheaded”. Others were being imprisoned. There are estimated to be a further 10,000 Ghanaians in Libya, whom the Ghana Government is trying to evacuate home.

‘Fighting’ for Gaddafi is dangerous, because it largely  consists of  sitting safely  in speeding cars and letting off gunfire from automatic weapons into unarmed crowds. I am, of course, not in Libya, thank God, and so cannot vouch for the way Gaddafi’s black ‘mercenaries’ are said to be going on killing sprees.

But in an insurrectionary situation, truth spreads very fast – simply because people need it to survive. When you are running for your life and someone asks you why, you normally don’t have enough time to weave a propaganda web and toss it at him. Your human instinct tells you to warn him of exactly the danger that is making you run.

The question is: what should the rest of Africa think of Gaddafi’s troubles? I shall give you three quotes – one from South Africa, one from Nigeria, and one from Ghana – which should help you to determine whether you want Gaddafi to continue unleashing untold bloodshed on Libya, in order to rule Libya (after having had 41 good years of autocratic rule) or not.

This is what Mr Mondli Makanya, former editor-in-chief of the Johannesburg Sunday Times (and currently, one of the most fearless columnists of the paper) wrote last Sunday, 27 February 2011:

QUOTE:
“So why did the world’s political community, which normally does not suffer fools, tolerate this madman?
Short answer: he paid a lot of people good money. 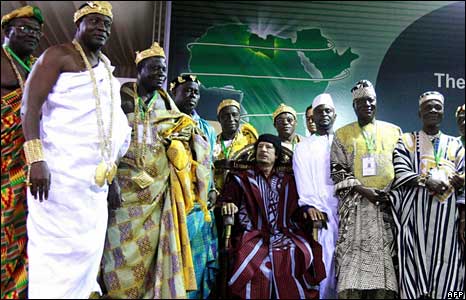 How much were these chiefs from Africa paid by Gaddafi to acknowledge him as ‘King if Kings’ of Africa?

He had many presidents, prime ministers and kings on his payroll. He also filled the coffers of some nations and financed the election campaigns of many parties.

If you ventured into downtown Johannesburg and visited some important political buildings you may well have heard interesting stories about bags that were brought back from visits to Tripoli.

It explains Africa’s failure to loudly condemn the slaughter on the streets of Libyan cities – and the mealy-mouthed statements from a certain building in central Johannesburg about the Libyan government and the people “seeking a political solution”, when civilians were being butchered. It is not easy to condemn a paymaster without qualifying your condemnation.

A lunatic like Gaddafi should never have been allowed to hide behind the fig leaf of national sovereignty and rule an oil-rich nation for more than 40 years. We may all laugh at him and condemn him, but we should be laughing at and condemning ourselves.
UNQUOTE

That is quite unequivocal: Mr Makhanya is suggesting that the South African ruling party, the ANC, had obtained a great deal of largesse from Gaddafi and so was prepared to close its eyes to the wanton killings that Gaddafi’s militias were directing at the people of Libya.

That is a damning verdict on the ANC, which, we all know, gained a lot of sympathy world-wide, when bloodshed was unleashed on the black people of South Africa at Sharpeville on 21 March 1960 and in Soweto on 16 June 1976. These are but two of the very bad dates for black South Africans that should make the ANC more concerned about bloodshed unleashed on unarmed people anywhere.

And now we come to the quote from Nigeria:
QUOTE:
“Lagos Guardian, 13 February 2009:
‘One wonders about this sudden enthusiasm [for a United States of Africa] which has overtaken Gaddafi, given the fact that his government has been involved in brutality against Africans from other countries who found themselves legally or illegally in Libya.
‘A lot of Nigerians and other Africans in search of greener pastures have been brutalised, dehumanised and tortured; some killed while the lucky ones got deported. If Gaddafi had shown some iota of mercy to these Africans who sneaked into Libya, maybe we would not have read [too] much [hidden] meaning into this idea being touted by him.’
UNQUOTE

Again, the importance of the quote cannot be over-emphasised. One of the most prestigious publications in Africa’s most populous country, had drawn attention to the contradiction between Gaddafi’s words and his deeds – especially as concerned Africans, the alleged ultimate beneficiaries of his efforts aimed at achieving a ‘United States of Africa’. I could go on and give chapter and verse about Gaddafi’s similar standing in countries like Uganda — where his arrogant bodyguards were nearly engaged in a shootout with Ugandan security personnel – but let me come back  home to Ghana.

Before giving you the quote, let me make you laugh a little – laughter is like gold in these rotten days in Africa. When the regime of the PNDC became closely associated with Libya in the early days of 1982, I was having lunch with a couple of ladies one day when, out of the blue, one of them asked me: “So what are you going to do about it?”

“Gaddafi taking over Ghana,” she said. “Nonsense,” I answered. “There is no Ghanaian who is going to sit down and allow a Libyan to dictate anything to him or her. How many ‘Green Books’ have you seen in Ghana?”

She said, quite seriously, “It is not the Green Book I am so much worried about. He is going to order all you uncircumcised Ghanaian men to get yourselves circumcised, in the name of Islam!”

I howled so loudly with laughter that everyone in the restaurant stared at me as if I had gone bonkers.

“Gaddafi circumcise us? Let him come and try!” I said, wiping the tears from my eyes.

And then I looked her in the eye and said, “Libya cannot even beat us at football. In the African championships that are coming up, we shall well and truly beat them, and even if Jerry Rawlings were to go to Libya himself to plead with our boys to allow Libya to beat us, they would turn a deaf ear to him and beat Libya very well. You cannot fool around with Ghanaians when it comes to their –er — “scabbarded” ‘swords’ or ‘sticks’! And — their football”

I haven’t had such a good laugh for many years. (By the way, we did beat Libya in that CAF football cup final on 19 March 1982 – but the result was arrived at in such a tortuous manner that at one stage, there were real fears that our boys were definitely  going to throw the match – under political direction! The full 90 minutes of play yielded a 1-1 draw, after which there were penalties, which Ghana just managed to win 6-5, bringing the total tally and final result to 7-6! Had we lost, those two ladies would have run me out of town and claimed that mass circumcision of Ghana males by hordes of sword-waving wansams [illicit circumcisers] from Libya was coming next! After the victory, I got into my car and joined a horde of Ghanaians who were celebrating by driving around blaring their car horns into the evening air. It was quite manic — but to me  it wasn’t only football honour that had been salvaged. Gee — an appointment with a wansam by order of Tripoli? That would never come happen, for sure! )

Okay – to the final quote. It is from the Daily Graphic of 17 December 2004, and confirms clearly that the methods adopted by the Libyan authorities in dealing with the citizens of other African states who fall short of the behaviour expected of them, while they are on sisterly Libyan territory, is almost always deplorable:

‘The Libyan Government has deported another batch of 132 Ghanaians living in that country.
‘This brings to 6,027, the total number of such deportees since the Libyan Government began the exercise… The deportees had been coming in on regular intervals of between two weeks and one month. They were brought in “aboard a cargo flight”.

‘Airport sources said that “apart from the first batch, which was brought in aboard a passenger plane, the rest had always been on cargo planes which had no seats… In an interview, some of the deportees alleged that the conditions at the camp had been dehumanising, since there were no sleeping places.
‘’There were only canopies stretched across a vast area of land and we were not fed regularly. We had to stay without water for over a day or two,” the deportees said, adding that there was overcrowding at the camp… “The source said that a particular batch had been kept at the camp for 17 days and so they were very exhausted.”’
UNQUOTE

Is it any wonder then that only politicians who have taken Gaddafi’s shilling, have any tears to shed for him on his day of reckoning with his own people? To anyone else, especially those 6,000 or more Ghanaians who were sent back to Ghana as mere cargo, Gaddafi’s fall is to be welcomed as good riddance to good rubbish.
–

Permanent link to this article: http://cameronduodu.com/uncategorized/gaddafi-when-he-took-over-ghana-by-cameron-duodu