IS THE BLACKMAN CURSED?

HAS MARTIN AMIDU SHOT HIMSELF IN THE FOOT? 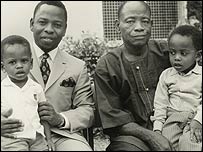 3 generations of Saro-Wiwas: Ken Saro-Wiwa is on the left, in a suit and tie.
KEN SARO-WIWA – ALREADY 20 YEARS? By CAMERON DUODU

It was my wife’s birthday, and I had planned a nice little outing for just the two of us.

But no sooner had I woken up than the telephone rang to usher me into unknown territory.

The caller was someone from BBC World Service Television. Would I be available for a live discussion about the Commonwealth Heads of Government Meeting in Auckland, New Zealand later that morning? he asked.

Of course. You don’t turn down the BBC World Service – especially if you have once been their Correspondent in Accra.

“Okay, we shall send a car for you at 10 a.m. The programme will be telecast from the Foreign Correspondents’ Club at Pall Mall. It shouldn’t take you more than 30 minuted to get there.”

I began my preparations. I would go in a nice Nigerian outfit I had bought in Lagos, I decided. Nigerian outfits are good everywhere – the three-piece agbada can stand the cold of winter, and in the summer, one could make do with just the up-and-down elements of it. Besides, whenever I wore it, people remarked that “agbada was made for tall people like you!”

But had I but known it, fate itself was what was dictating my choices. Nigeria was indeed to invade and ruin my world for the rest of the day.

I got to the venue in time and the programme started. With me was an Indian diplomat from the Commonwealth Secretariat. We didn’t contradict each other too much, and I was enjoying myself, recounting how, at international conferences, Australians, New Zealanders and Canadians as well as the Afro-Asian members of the Commonwealth, managed to get on better than any other group, apart from, probably, the delegates from Francophone Africa.

We were talking about such heart-warming issues when, suddenly, the presenter’s eyes widened. He cut us off in mid-sentence to say: “I have just been told that the Nigerian environmental activist, Ken Saro-Wiwa, and eight other activists from Ogoniland in Nigeria, have been hanged by the Nigerian Government of General Sani Abacha!”

WHAAAAAT? We both shouted. To say we were astonished would be an under-statement. We were shocked clean out of our minds.

I was asked to comment on the terrible news. I gave the background to the Ogoni story – how Shell Petroleum was digging oil out of the place and had carelessly polluted its rivers, streams and lagoons with spilt petroleum. How after many years of appealing to Shell and its Nigerian Federal Government partner to cease the oil spills and compensate the people for ruined farmland and fishing grounds, the Ogoni, under Ken Saro-Wiwa’s leadership, had formed the Movement for the Survival of the Ogoni People (MOSOP) with which they had mounted a campaign for self-rule in Ogoniland.

PHOTO: Oil spills like this had devastated Ogoni’s rivers, lagoons and farmlands. KEN SARO-WIWA and eight of his fellow activists were executed by the Nigerian dictator, General  Sani Abacha, for protesting against this wanton  destruction of their birthplace.

It was in the course of the campaign that Ken Saro-Wiwa was arrested and charged with causing the death of some Ogonis who didn’t agree with the MOSOP campaign .

I explained : “Ken Saro-Wiwa was not even at the rally at which the people lost their lives.”

How come I knew so much about the Ogoni people’s struggle?

I first met Saro-Wiwa in 1986, when I was working for a posh magazine called South, based in London.

He’d just published a novel called Soza Boy, which he described, with a quirky but unashamed aplomb, as “a novel in rotten English”.

Rotten English, as Saro-Wiwa rendered it in Soza Boy, was totally eccentric. It was based on what we in West Africa call “pidgin English”, but it was better. You could see that every sentence had been deliberately crafted to make you laugh. One sentence that sticks to my mind is “Ah, how government na him go catch government?”

It is the fun in the book that made me take notice of it, for it had landed on my desk by way of a public relations outfit based in London, and I had snootily decided that any novelist who used a PR firm could not be taken seriously. It occurred to me, however, that if an unknown guy published his own novel, it would be difficult to get it reviewed if he just naively sent it to snobbish London literary editors, and relied on their love for literature to induce them to pass it on to one of their regular reviewers.

So I asked to meet Saro-Wiwa. He came to see me at the offices of Index On Censorship in Islington, where I was to be found when I was not at South.

My first impression of him was not at all favourable. He smoked a pipe, and as I am allergic to tobacco, I put the worst possible construction upon this.

But talking to Saro-Wiwa immediately put me at my ease. He was an unashamed capitalist – he casually let drop the fact that he dealt in commodities.

The guy was full of wit. When I asked him why he had “betrayed” the Biafran cause during the Nigerian civil war and joined the federal side, he told me that his ethnic group, the Ogoni, is so puny in numbers that “everyone oppresses us”.

We kept in touch after my review of Soza Boy appeared. Then I noticed from pieces he was writing that he was becoming militantly anti-Federal Nigeria. Next thing I knew, he’d shown up in my house with several items relating to Ogoni “independence”, including a national anthem and a potential flag.

“Hey man,” I warned him, “these military rulers of yours are going to charge you with treason if you’re not careful.”

He said, “Let them do their worst. We are tired. They just take the oil money from our land and neglect the people. How much longer can we take it?”

Well, inevitably, he was arrested. And fortunately, in those days, The Observer newspaper in London had people who were closely interested in Africa. So, the foreign desk proposed that I should do a big profile of Saro-Wiwa. From then on, The Observer devoted many column inches to articles I wrote about the Ogoni people’s struggle against Shell and the Nigerian Federal Government. We were outraged when he was sentenced to death, and we campaigned for his release.

One night, I had a most vivid dream, in which I heard Saro-Wiwa’s voice asking plaintively, “Cameron, why are you allowing them to kill us?”

I was damn scared and took the matter most seriously. I became a campaigner – something which my school of journalism normally frowns upon. The publicity we generated was of such strength that we thought Sani Abacha would never dare to execute Saro-Wiwa and the eight other Ogonis.

But he had! The BBC kept me in its TV studios talking about the executions all day. By the time I got home, I was so tired and overcome with grief that my wife’s birthday celebration had to be postponed!

In the aftermath of the executions, the London press generally tried to make President Nelson Mandela a scapegoat for Abacha’s butchery. I felt that this was quite unfair, for I was privy to attempts Mr Mandela had made to influence Abacha, not only on Saro-Wiwa’s behalf, but also on behalf of Chief Moshood Abiola, the winner of the Nigerian presidential election, whom Abacha had unjustly imprisoned.

So I flew down to Johannesburg from London to talk to Mandela for the record. He exploded on hearing Abacha’s name: Abacha’s action was “barbaric”, he said. Abacha, he added for good measure, was “a brutal dictator who had used a ‘kangaroo court’ to try and execute human rights activists.” In doing so, Abacha had placed himself on a “time bomb, and I am going to explode it underneath him!” Mr Mandela declared.

This was incendiary stuff. It marked the first time, to my knowledge, that an African head of state had publicly gone against “trade union rules” and publicly insulted a fellow “card holder.” It was a great interview and I splashed it on the BBC, The Observer, The Sunday Independent in Johannesburg and De Volkskrant in Amsterdam.

And so, on 10 November 2015, I shall have a double reason to down many beers – in memory of my dear wife, Beryl, who is no longer here to celebrate her birthday, and also of Ken Saro-Wiwa, a fine writer whose talent was cruelly extinguished by a thievish, inhuman dictator called Sani Abacha.

Ken Saro-Wiwa’s death ‘not in vain’

The daughter of Ken Saro-Wiwa, who was executed by the Nigerian military government with eight other activists 20 years ago today, has been remembering her father on her Facebook page

She said: “Courage is not the absence of fear but the ability to overcome it. My father pursued his objectives, knowing the huge risks.

“The Ogoni Nine risked their lives in order for our people to enjoy the basics of life: clean water, rivers filled with fish to eat, schools for the children. Nobody should have to die for such meagre requests. But their deaths were not in vain.

“We remember you and thank you.“

In 1992, when I was 16, my father Ken Saro-Wiwa wrote me a letter. Among other things, he told me that the Nigerian military dictatorship might kill him as a result of his campaign for human rights in the oil-polluted Niger Delta. I thought he was exaggerating, and I was angry with him for scaremongering.

They say that courage is not the absence of fear but the ability to overcome it. My father pursued his objectives, knowing the huge risks. On the morning of November 10th, 1…

Malcolm Venable thanks for sharing this!
4 hrs

Frank Oti All of us were touched.Their place in nigerian history remains alive.
2 hrs

Permanent link to this article: http://cameronduodu.com/uncategorized/ken-saro-wiwa-already-twenty-years