ARE AFRICAN REALLY THE UNHAPPIEST PEOPLE ON EARTH, THEN?

parts of abidjan are like a war zone — BBC 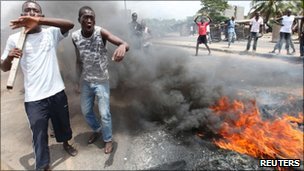 The UNHCR has suspended plans to open a camp in the west for those fleeing the violence because of safety concerns.

Tensions have been rising since President Laurent Gbagbo refused to hand power to Alassane Ouattara, widely seen as the winner of November’s poll.

Mr Franquin comments come as UN peacekeepers in country say they are overstretched and cannot provide security for all civilians.

“We are overstretched in terms of patrolling. We conducted over 865 patrols last week. You can’t be in every corner of the city,” UN spokesman Hamadoun Toure told the BBC.

Once hailed as a model of stability, slipped into internal strife several years after death of first President Felix Houphouet-Boigny in 1993
An armed rebellion in 2002 split the country between rebel north and government south
A power-sharing government took over in 2007 with the ex-rebel leader as prime minister
2010: First presidential elections in 10 years -culmination of the peace process
Country profile: Ivory Coast

The pro-Ouattara stronghold of Abobo has seen violent clashes for nearly two weeks and the UN estimates some 200,000 people have fled the area.

“Certain areas of Abidjan are truly in a situation of war with the population fleeing,” Mr Franquin said.

“The situation is making it impossible to reach people who are in need of urgent humanitarian assistance,” he said.

In the west, UNHCR staff had been withdrawn to Abidjan for their safety and the agency was trying to set up networks using local non-governmental organisations to help those displaced, he said.

A camp is being set up in neighbouring Liberia where tens of thousands have also fled.

Meanwhile, Mr Toure said the UN had received two helicopter gunships this week and he hoped the security situation would improve with the arrival of more peacekeepers. The BBC’s international development correspondent Mark Doyle says the delivery of the helicopter gunships is a measure of the seriousness of the situation.The idea that these machines might be used, even in a defensive capacity, in a big overcrowded city like Abidjan takes the situation in Ivory Coast to a new level, he says.

African Union heads of state who are attempting to resolve the crisis are due to meet in Mauritania later on Friday.

The presidents of Burkina Faso, Chad, Mauritania and South Africa and Tanzania were initially given a month by the AU to do their work.

But this week that time frame was extended until the end of March.

Permanent link to this article: http://cameronduodu.com/uncategorized/parts-of-abidjan-are-like-a-war-zone-bbc