HUGE MARCH IN LONDON AGAINST CUTS IN PUBLIC EXPENDITURE 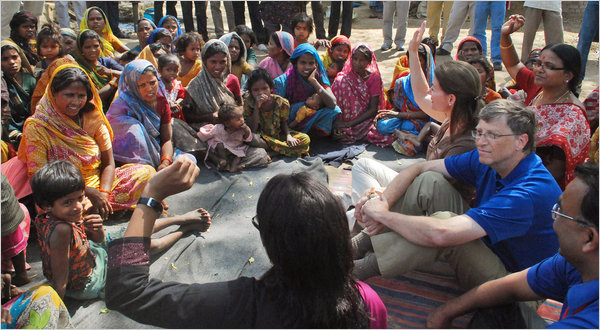 By HEATHER TIMMONS and VIKAS BAJAJ

NEW DELHI — India is behind only the United States and China in its number of billionaires. But by global standards, its charitable giving is miserly.

None of the attendees Thursday, which included many of India’s top business families, pledged immediately to give away most of their fortunes, as the Gateses and Mr. Buffett have done.

The three Americans met behind closed doors with about 70 of India’s wealthiest people Thursday afternoon at the Taj Majal hotel here, for a “giving discussion” meant to start gently preaching the gospel of philanthropy.

“It is not a case where we passed around a tin cup or had a signup list,” Mr. Gates said at a crowded news conference afterward. “Anything these people do will be their choice.”

But Mr. Buffett predicted that the meeting would eventually have an effect.

“I would be almost certain” that philanthropy increases in India over the next decade, Mr. Buffett said at the news conference. “The people in that room drew strength and conviction from hearing others talk,” he said. While India is home to more than 50 billionaires, the level of philanthropic giving is far lower than in the developed world.

Although nearly every major company or prominent business executive has a pet charity or donates to a cause, the overall portion of income given away is low.

The discrepancy can be glaring in India, which has the most poor people in the world. About 40 percent of its 1.2 billion people live below the World Bank’s poverty line of $1.25 a day, and there are staggering rates of malnutrition and preventable diseases.

“Philanthropy in India so far has been what we call feel-good philanthropy, instead of outcome or results-based philanthropy,” said Parth J. Shah, the president of the Centre for Civil Society, a New Delhi research organization. People give money to temples, or establish schools or hospitals, he said, but they tend not to focus on the impact of what they have set up or how that impact could be multiplied.

Charitable donations in India make up about 0.6 percent of the country’s gross domestic product, well below the 2.2 percent in the United States, according to a study by Bain management consultants. And government and foreign contributors make up the majority of donations in India, with individuals and charities donating just 10 percent of the total, according to Bain.

Still, the Bain report showed that India gave more as a percentage of its G.D.P. than Brazil (0.3 percent) or China (0.1 percent).

Bill and Melinda Gates and Mr. Buffett introduced the Giving Pledge last year in the United States, and 59 wealthy American families have since promised to give half or more of their wealth to philanthropic activities.

In September, Mr. Gates and Mr. Buffett held an event with China’s richest to encourage donations, to a lukewarm reception. Only about two-thirds of the invitees attended. Preparations for Thursday’s meeting seemed intended to lower expectations. The event was named the “Giving Discussion,” the guest list was closely guarded, and a press release afterward said that Mr. Buffett and the Gateses had “stressed that India would find its own unique approach” to charity.

“In neither China nor India were we coming asking people to make any kind of commitment,” Mr. Gates said during the news conference.

Many Indian billionaires have not been big givers partly because the country does not have large, well-run foundations and charities that could absorb hundreds of millions or billions of dollars in donations, said Jayant Sinha. He heads the India office of Omidyar Network, a philanthropic investment firm set up by Pierre Omidyar, the French-born Iranian-American founder of eBay.

Some of India’s richest men like Azim Premji, chairman of the technology companyWipro, have set up their own foundations. Mr. Premji recently gave his nonprofit organization shares in Wipro worth $2 billion to start a university and to help government-run schools in rural towns and villages. Shiv Nadar, a founder of another company, HCL Technologies, has also started an education-focused foundation.

“There are now some good examples of where people have put their money to very effective purposes, but they have had to work hard on the professionalization and the institutionalization of their philanthropic arms,” Mr. Sinha said. “There is no point giving it away if you can’t apply it well.”

Furthermore, Mr. Sinha said, many of India’s billionaires have earned their wealth relatively recently and are still actively managing businesses. That helps explain why many have not yet begun to give much away or establish robust philanthropic organizations.

For that matter, it was only after Mr. Gates stepped back from the day-to-day running ofMicrosoft that he and his wife became global philanthropists.

Older and more established Indian business families have focused more intently on philanthropy. Companies that are part of India’s largest conglomerate, the Tata Group, for instance, are partly owned by charitable trusts started by the Tata family. The trusts use the dividends they earn from Tata companies to support charities and social programs across the country.

An earlier generation of the Tata family also founded several of India’s most prestigious universities, including the Indian Institute of Science in Bangalore and Tata Institute of Fundamental Research in Mumbai.

But many of those institutions were established several decades, or even a century, ago, and the current generation of wealthy Indians has not matched the ambition of those earlier efforts, experts say.

Bill and Melinda Gates and Mr. Buffett have been criticized by other billionaires for their charitable impulses. On Thursday, for example, Mr. Buffett shrugged off one such critic, fielding a question about the telecommunications billionaire Carlos Slim Helú’s widely reported remark that creating jobs was more important than playing Santa Claus.

“You can create jobs and be Santa Claus at the same time,” Mr. Buffett said, laughing. “I mean, he employs 12 elves.”

Permanent link to this article: http://cameronduodu.com/uncategorized/gates-and-buffett6-are-trying-to-teach-indian-billionaires-mto-be-mnore-philanthropic